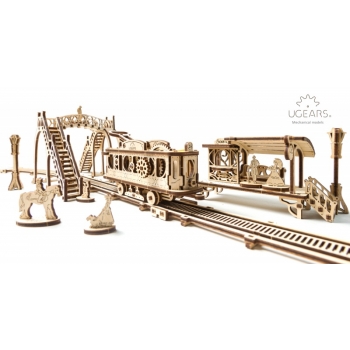 From the very beginning of our journey, we were inspired with the idea to create the unique Mechanical Town on the river’s bank, open to all winds, religions and ideas, a town of musicians, artists and inventors, masters and warriors. The most amazing town on the earth. The town, were people love, fight, work and search for innovation and, of course, have a fun.

We are introducing a Tram Line Model – the first mechanical model from the new Mechanical Town Series. The model which you can build with your own hands, look and feel each part, each movement of transport vehicles, surroundings, play and create your own stories with people who are living in this town. The new model has gaming component and made entirely from wooden materials. It’s great for hobby & collection. Each part has a unique design and interesting engineering. UGEARS’ Tram Line model doesn’t need glue or special tools or even toothpicks to connect parts, which makes putting it together even more exciting.

Tram Line model consists of 14 parts, which come in a convenient scale for building and playing with.

Tram Car is equipped with an overhead pantograph for stepping it up to “drive” mode and a knob for opening and closing doors. Wind-up of the tram car and watch it move on the rails, entering into the Depot. After turning on 180 degree on the turntable, it moves on its own to the end of the line. There is no electricity inside: just gears, wheels, cranks, rubber band engine and tons of fun!
Tram Stop on the platform complete with a clock, a bench, a little stairs and a Ticket Kiosk. The stairs are removable and can be placed in any part of the platform.
Tram Depot with a gate where the tram drives in and where it prepares for the next trip according to the route timetable. The depot is also equipped with a Turntable for turning the tram on 180 degree for the next trip. There is a special “tongue” on the rails of the turntable which stops the tram in the closed position, and reclines after the turn of the turntable allowing the tram move on the return route.
Footbridge – the pedestrian crossing - is made in the form of arches and set across the tracks. It can also be located at a crossroads, and cars can pass through arches.
Straight tracks with junctions
Radius tracks with junctions
Street Lamps
A Gentleman: VIP of the Mechanical Town. A manufacturer, millionaire, philanthropist, media darling and hero of gossip….or a person from your own story
A Young inventor who reads a newspaper sitting on a bench…or a spy, an agent ….. your option ..in your own story
A beautiful Stranger with a little dog…..or a pretty woman in your own story
An ice-cream seller hiding from the heat under an umbrella…. or another pretty girl in your own story :)
A policeman (sheriff ) on the horse….or a handsome cowboy in your own story
Factory Worker
News-Boy

​The cutting is well done; each of the parts comes out of the plywood sheets easily. No glue and special tools are needed for putting the model together. You can assemble it at home on the table. Fits together like a puzzle without glue or special tools thanks to Ugears’ patented plywood joints. 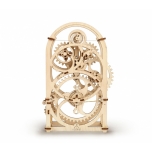 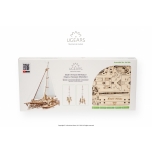 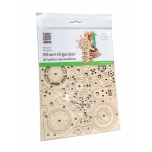 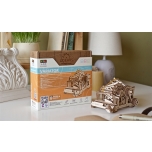 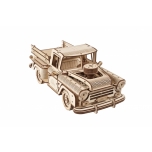