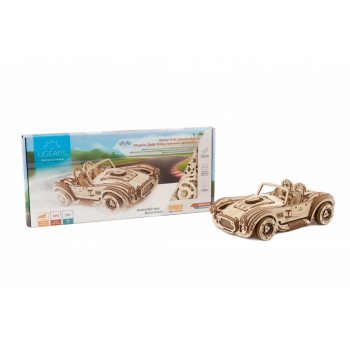 We know you love car modelling and you love the Ugears Dream Cabriolet, Roadster, and U-9
Grand Prix. Well, make room on the shelf, because a powerful new mechanical model just
muscled its way into the Ugears Automotive collection. Introducing the Drift Cobra Racing Car,
a beautifully-styled, two-seat convertible—our twist on what may be the most revered sports
car of all time: the Shelby Cobra 427. The Cobra 427, produced between 1965-67, had a 7.0 litre
450-510 horsepower engine, did 0-60 mph in just over 4 seconds, and had a top speed of 185
mph.
Carroll Shelby, a former race car driver and automotive designer, was hired by the Ford Motor
Co. to develop a high performance racer able to compete with the dominant Italian race team
of Ferrari. The Americans' four consecutive victories at the prestigious Le Mans 24-hour race
between 1966-69, in Ford GT40s, is the stuff of legend. More recently, it was the subject of the
Oscar-winning 2019 film, "Ford v Ferrari," starring Matt Damon as Shelby and Christian Bale as
Ken Miles, the ace driver for the 1966 Ford team. The success of the cars coming out of Shelby's
surfside Venice, California shop were the crest of a wave of American high performance
supercars or muscle cars, characterized by powerful V8 motors placed into relatively
lightweight, mass-produced, rear-wheel drive chassis. The Shelby Cobra stands out as an
American icon, perhaps the greatest muscle car and most "posterized" car in history.
Designed for drag racing but street legal, muscle cars offer incredible automotive power at a
relatively affordable price point. The scarcity and unbelievable auction prices today of some of
these classic street beasts is due in no small part to the fact that they were often more car than
their owners could handle, resulting in frequent crashes. Muscle cars have squared off in many
an illegal street race, sometimes with ownership papers on the line (another way to lose your
muscle car!). In that spirit, why not convene a gathering of model building friends, show off
your newly-built Ugears Drift Cobra Racing Cars, put your car modelling prowess to the test and
race for pinks! But remember: the first rule of Ugears race club is: you do not talk about Ugears
race club. The second rule of Ugears race club is: you do not talk about Ugears race club!
Driven by a powerful spring motor, the Ugears Drift Cobra racing car has the fastest team of
horses under the hood of any mechanical wooden model we know. The model is wound by

means of a ratchet knob under the chassis. Before winding your 3-D wooden Drift Cobra model
racing car, move the air filter that protrudes from the hood toward the windshield, and flip the
switch in front of the passenger-side seat into the Lock position (parallel to the door). Now
twist the ratchet underneath the car's body. After 6 to 6.5 turns of the knob the spring is fully
loaded, and — vroom! vroom! — your racer is ready to roar! Set the gear shift lever, located
between the driver and passenger seats, to the desired position (Reverse, Neutral, Drive). To
start the model, set it down on a flat surface, slide the air filter forward, and watch your Cobra
lay rubber in a spin out (start with the wheels turned to one side), do circles, or speed down the
track in a straight line.
We think this 3D puzzle / DIY model is a beaut, with its fat tires, bulging curves (thanks to pieces
that are precision laser-cut into fine 1mm plywood), a big open mouth up front, and open-air
convertible design. This wooden car's moving parts include turning front wheels, doors that
open, and a hood and trunk that can be raised. Instead of a rubber band motor we've used a
powerful spring mechanism to provide the "muscle" in this racer and extend the model's usable
life. The ratchet mechanism means you don't have to hold the knob the entire time you're
winding the model—potential energy is stored with each twist, without slippage, until the
strong internal spring is fully loaded.
To put the model in "drift mode," turn the front wheels fully to one side or the other, set it
down on a smooth surface such as tile, and watch as the model peels out in a sideways skid
(ideally, your model should make a half to a full revolution before continuing forward,
depending on the driving surface and turn angle of the wheels). When the wheels are set in
their straight position, the model covers a lot of ground—8 meters or more! Set the wheels in a
gentler turn, or put the racer down on a less slippery surface, and watch your Drift Cobra
complete two or three full circles.
The DIY model kit for the Drift Cobra Racing Car includes 370 parts, with an estimated assembly
time of nine hours, and is rated Advanced level. Why not take a page out of Carroll Shelby's
book and experience the pride and satisfaction of building a beautiful, functional automotive
machine with your own hands. Everything you need for this challenging but doable DIY wooden
puzzle project comes right in the box: high quality plywood boards with precision laser-cut
pieces that you snap out then snap together without need of glue or special tools, a metal
spring that powers the mechanism, and of course a set of detailed, illustrated instructions in 11
languages.
Ugears model kits appeal to builders and hobbyists who love quality, clever design, and who
appreciate ingenious mechanical elements with real world analogues. The Ugears Drift Cobra
Racing Car is a great DIY idea and perfect gift idea for the car lovers among your circle of friends
and family. Anyone who loved the film Ford v Ferrari, who loves car modelling, DIY projects, 3D
puzzles, or who appreciates outstanding mechanical and aesthetic design, is going to love the
Drift Cobra Racing Car.
Sarnased tooted 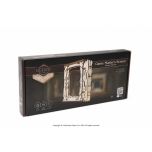 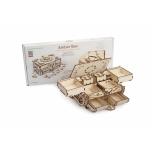 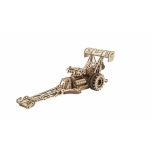 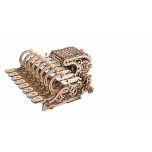 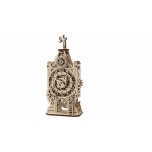