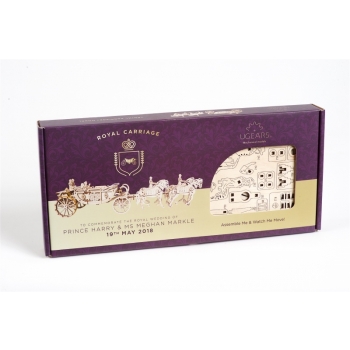 Ahead of the Royal Wedding of Meghan Markle and Prince Harry on the 19th May, Ugears has released its incredibly detailed build-your-own
model of the Royal Carriage.
Inspired by the 1902 State Landau, the intricate and elegant Carriage is drawn by four graceful horses. Ugears’ designers put special attention in
to the details of the model: the seats of the passenger compartment imitate soft leather, the coachmen wear their finest dress coats, and the
Royal coat of arms is laser etched on the door panels. The doors lock in the open or closed position. The rubber band suspension belts make the
design of the coach even more realistic.
The Royal Carriage kit comes with two sets of figures, Prince Harry in his finest military dress and his beautiful bride Meghan, as well as HRH
The Queen and HRH The Duke of Edinburgh. You can choose which royals will go on a stroll – two figures at a time.
The model is driven by a small and compact rubber band motor that is easy to assemble. The clever design of the Carriage allows you to
observe the workings of the mechanism through the carved body of the model. The winding key is shaped to look like the Royal coat of arms
but with a Ugears logo laser etched on it. Despite the small-sized motor, a fully wound up (20-25 half-turns of the winding key) model can cover
up to 4 meters. This is possible due to a freewheel mechanism that ensures that the model continues to move for some time because of
momentum after the motor has finished its work.
The front wheels of the Carriage have a small turning angle and the back wheels can be blocked to prevent the wind up model from fleeing
away prematurely. When you are ready to send your Royal Carriage for a stroll, switch the small lever in the rear that will release the back axle.
Celebrate the royal wedding and the beauty of mechanics with the new Royal Carriage model from Ugears. We do declare that assembling this
model is a royal pleasure.
Made from sustainable wooden materials the kit has all you need for assembly: a set of high-quality plywood boards with precisely cutout
parts, full-color, detailed step by step, truly easy to follow instructions and several spare parts inside. The first thing you notice when opening
the box is a sweet faint scent of wood. It’s natural and healthy.  The model is made of a high quality plywood tested in European laboratories
and also approved for use in the production of furniture for children. No glue and special tools are needed for putting the model together. You
can assemble it at home on the table. Fits together like a puzzle without glue or special tools or even toothpicks thanks to Ugears’ patented
plywood joints.
Sarnased tooted 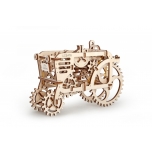 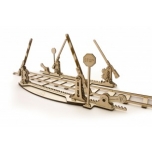 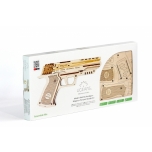 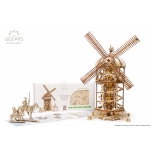